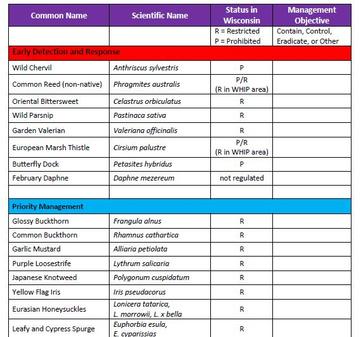 WHICH SPECIES ARE THE MOST IMPORTANT

Awareness of the distribution and abundance of invasive plants across our two-county area is a mandatory component of being prepared for new invasions.  From 2012 to 2014, WHIP invested significant effort to capture a “snapshot” of the status of local invasive populations.  With funding from the Lumberjack Resource Conservation & Development Council (Rhinelander, Wisconsin), WHIP carried out invasive plant surveys on the right-of-ways along all county highways in Oneida and Vilas counties.  These surveys yielded 2381 invasive plant records.  Maps produced from the survey data reveal relatively low occurrences of invasive plants as compared to other areas of the state.  The favorable results could be interpreted that north central WI is not as highly vulnerable to the plethora of invasive plants common along roadways further south.  However, the WHIP steering committee recognized the opportunity for proactive preparation for the onslaught of invasive plants likely spreading northward and the financial implications of mitigating these species at a later date.

Through examining these survey results and consulting with our partner groups, WHIP has now created three Priority Lists of terrestrial invasive plant species: “Early Detection & Response”, “Priority Management”, and “Watch”.  Species are separated into three categories based on overall distribution, local abundance, ecological and/or human health threats.  These lists are intended to serve as a guideline for WHIP members and partners.  They will be reviewed and adjusted as needed.

Definitions
Early Detection and Response:  This category of species exist only in isolated, scattered populations and are of high priority for early detection and rapid response efforts.  Eradicating new invasions of these species early is the most successful way to prevent their spread.
Priority Management:   Species in this category are established in the WHIP management area and their presence can negatively impact natural areas, making their control and management necessary.
Watch:  Species in this category are yet to be observed in the WHIP management area but have been recorded in at least one adjacent county.  These plants are a detection priority as they are known to be particularly damaging either to ecological systems or to human health.

Status in Wisconsin: P = Prohibited, R = Restricted
Species are chosen for regulation by state agencies based on the harm they pose to the state’s environment, economy, and/or public health.  In general, species that are more widespread or naturalized are restricted while less widespread species are prohibited.  The transport, introduction, and sale of all regulated species is illegal.  In Wisconsin, it is illegal to possess a prohibited species, and property owners are legally required to control prohibited species present on their property.

Click the image below to read our Priority Lists of Invasive Species (plants).  Though created in 2016, these lists are ongoing, and will be updated regularly as new information becomes available.