WHIP has been actively involved in surveying our County Highways in Oneida and Vilas Counties (all roads named A through Z!) for invasive plants, since this is one of the most common pathways of spread for terrestrial invasive species.  In 2012, our group was awarded a grant from Lumberjack RC&D to hire individuals to survey (by foot) all county roads, both sides, reporting any invasives using a GPS unit.  These surveys took roughly 4 months in each county, and were completed by the end of 2013.  Both employees (Rosie Page and Brigid Hanke) contributed to the ultimate bi-county Draft Highway Roadside Management Plan which was drafted by the WHIP Steering Committee.  This document offers recommendations on steps to follow as new species are reported, and also specifies best management practices for preventing the spread of noxious weeds down highways.

The following map shows all invasive plant occurrences recorded in 2012 along the county roads in Oneida County.  You can see that in some spots it's nearly impossible to distinguish each species, since the density of invasive species is so high! 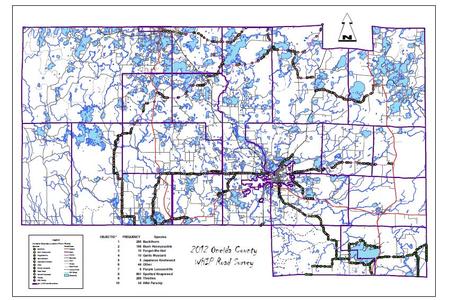